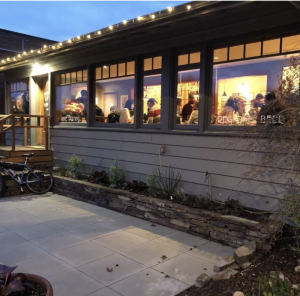 Founded in 2008 on Bainbridge Island, is a small lot winery that produces Bordeaux, Rhone, Italian, and Spanish varietal wines. Owner and vintner Paul Bianchi participated in his first crush 21 years ago and has gone on to produce wines that have won numerous national awards as well as 94 point scores. Grapes are sourced from notable vineyards from Eastern Washington where terroir and vineyard age is paramount. Importantly attentive élevage in the cellar insures wines are optimally aged prior to bottling and release.

Is the primary tasting room for Amelia Wynn wines. It’s new location of 390 Winslow Way East opened on December 7th after being located at the 450 Winslow Way East since 2016. In addition to serving wine flights the Bistro is also offering a full menu of bistro cuisine under the watchful eye of Chef Noel Spivey.